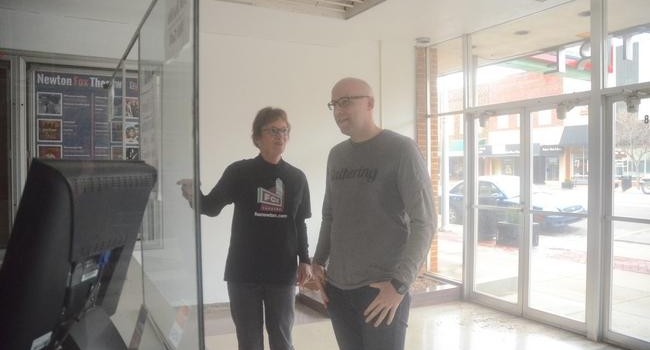 The Fox Theatre is about to become home to The Gathering, a church which has been meeting in a downtown coffee shop since it was formed in October of 2014. The only thing left now is to sign final purchase agreements and deed work.

“Our vision is to renew the Fox Theatre,” said Brandon Eck, lead pastor of The Gathering. “We want to renovate, revive and cause it to thrive.”

The marquee, box office and theater aspects of the building will remain once renovations are completed. The church is targeting Easter Sunday, April 5, for the first Sunday services.

“There will be no mistake that it will be the Fox,” Eck said. “… I have been going to the Fox Theatre my entire life. My vision is to keep this, to keep it for the people who grew up in Newton. This whole town has cherished memories of the Fox.”

The Fox Theatre first opened as “The Royal” in 1915. It closed in 1921 for renovation and enlargements. It reopened shortly after, with a larger building and larger stage, as “The Regent.” In 1955 20th Century Fox purchased the theater and began operating it as a movie theater. It remained in operation as a movie theater until it was abandoned in the late 1990s.

Taken over by the city, the theater remained empty until it was purchased by the Class of 1965 development group in 1999. In 2012 the theater changed hands again, this time ownership was transferred to the newly formed Newton Fox Theatre Performing Arts Center Inc, a non-profit corporation.

“This is a new chapter, and there is a story of what the board has done,” said Rosalind Scudder, president of the Fox board. “It really was on the brink. There was a a lot of volunteer hours dedicated to this.”

The Fox board will not go away, despite no longer owning the building. The group will still schedule concerts, events and movies in the building — with a preferred rental status under a contractual agreement with The Gathering.

“This really is a win-win situation,” Scudder said. “It helps the Fox board remain solvent and keeps the theater moving forward. We don’t have to struggle with future renovations and meeting the bills.”

The church rented and used the Fox in December for a Christmas Eve service — but the idea of the church meeting in the Fox is much older than that. Eck said it was part of a vision when the church was first planted, but the timing was not right for such a move until now.

He also said allowing for the theater to operate as a theater, not only a church building, and not changing the outer facade aligns with the church mission and vision.

“We have a vision of Newton reborn,” Eck said. “We view this as part of the effort to revive downtown. Is it possible for a church to have a positive economic impact on a city? We think the Fox Theatre is vital to downtown.”

Source: The Newton Kansan
Article and photos by Chad Frey