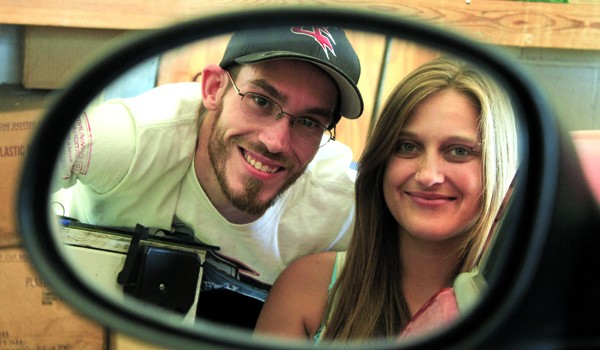 Both of Viktoria Bichet’s parents died and were brought back to life — six months apart. That was in 2013. The year was traumatic for the family, as Viktoria’s mother, Lana Bichet, had six-way bypass surgery after having a heart attack at the family shop in Newton, while her father, Stew Bichet, was in a coma for 10 days as the result of complications from diabetes. Both parents ended up at Wesley Medical Center, and both are alive and kickin’.

“Most families are into drama,” Lana joked. “Ours seems to be into trauma.”

Those were rough times, Lana said.

Viktoria and her boyfriend, Jesse Boucher, both of Hillsboro, are co-managers of ASAP Auto­Works, 500 Washington Road in Newton. Viktoria’s parents, who also reside in Hillsboro, own ASAP AutoWorks, as well as ASAP AutoGlass.

“If it hadn’t been for Viktoria and Jesse (in) 2013, our business would have failed,” Lana said. “We wouldn’t have been able to do it, and they did it all — even in the face of such adversity.”

From the sounds of it, Viktoria learned her work ethic from her parents. There’s a value there that family helps family. After Viktoria was pinned between a customer’s truck she had left running and their work van on May 31, her mother stepped in to fill Viktoria’s shoes while she recuperated. The truck slipped into reserve, pinning Viktoria on the right side, but she was able to get loose. She first called Jesse, and, fortunately, she didn’t have any broken bones.

Viktoria grew up helping her father with the ASAP AutoGlass business, which started in November 2003 and was based out of her parents’ home. She rode around with her dad and helped install vehicle windshields; Viktoria was certified to do rock chip repair before she was 13.

“She was able to do those before she was even able to drive a car,” Lana said.

ASAP AutoWorks opened its doors April 19, 2011, and Viktoria and Jesse are considered somewhat owners of AutoWorks, although they’re hopeful to actually make it theirs within the next 10 years. In March 2011, Stew received a call from Jim Tongish, who had Jim’s Motors at the 500 Washing­ton address, and he wondered whether Stew and Lana wanted to work out of that building, as he was closing that shop. Tongish ended up leaving some equipment there for the family could use, and he still has a dealership on U.S. Highway 50.

“It was at the point where we were ready to have a storefront,” Stew said.

With the AutoGlass business, Stew drove around repairing and replacing windshields and other vehicle windows, but didn’t have a storefront. Stew knows dealers in the area, and much of his business was around Newton. They even did windshield work for Jim’s Motors, a car lot. They leased the building for the glass business more than anything else at the time.

But their daughter had a dream. She wanted to have her own business. What influenced her, she said, was being raised in a mostly self-employed household.

“I got into it very young, and I always wanted to own my own business,” Viktoria said. “For me, it was a natural thing for me to do, I guess — an opportunity that had to be taken.”

When the opportunity came up for ASAP AutoWorks, Lana sent Jesse and Viktoria to a one-week tinting school. They also learned about detailing from car dealers they knew.

“I basically pushed them into the fire,” Lana said. “They’ve definitely done a fabulous job. Couldn’t be prouder of both of them.”

ASAP AutoWorks does window tinting, detailing, windshield chip repairs, windshield replacement and installing vehicle breathalyzers. The business is a subcontractor for a LifeSafer Ignition Interlock of Kansas in Hutchinson.

Those seeking breathalyzers are either court ordered or voluntary, Jesse said.

“We haven’t had a voluntary yet,” he said.

They call the business AutoWorks so they can add other services as time goes by, such as remote starts and back-up cameras.

But the work they do carries quality. Stew said he’s been hesitant in the past to have his name on other people’s work, but not on Viktoria and Jesse’s. He said he trusts them.

The two stick behind their work.

“We try to make sure no customer leaves dissatisfied because we want you to tell 10 friends what a good job you got,” Viktoria said.

Although AutoGlass doesn’t work out of AutoWorks, Jesse and Viktoria give referrals to Stew.

“Don’t know what I’d do without them,” he said. He also said the size of their customer base is amazing, and it’s impressive to have two young adults be this successful.

The AutoWorks business is seasonal, with spring and summer being the busier times. In September, they had two to three jobs a day, which keeps them pretty busy, and they’re constantly monitoring breathalyzers. When they detail a vehicle, they get every nook and cranny, doing some detailing for used car lots.

“Our goal with every detail we do is to get it looking as close to car lot new as we can,” Viktoria said.

About half of the customers who have inside detailing want the outside of their vehicles cleaned, such as tires and excessive bugs.

The two enjoy having a business in Newton.

“Love doing business in Newton,” Viktoria said. “It was always one of our bigger towns for the AutoGlass business. Things have been great so far. One of the things that became obvious is we have to give back to the community in order for the community to support you.”

That’s where Newton Young Professionals and the Newton Area Chamber of Commerce come into their lives. Both are members of NYP and the Chamber. Viktoria is the events chair with NYP and is on the executive committee on the Chamber Board of Directors.

Another feather in Viktoria’s cap was being the Hillsboro Noon Lions Club president at the age of 19. Jesse said he thinks his girlfriend acquired a lot of her leadership skills through that experience. She also served two years as district chair for District S for Lions Clubs International.

“We’ve gotten a lot of help with people we’ve gotten to know through the Chamber and just people that we’ve met and being part of the Newton Young Professionals, as well,” Jesse said.

Viktoria said her hobbies are the Chamber and NYP, as well as helping out with the Hillsboro Lions Club. Jesse’s hobbies include fishing and shooting targets.

In addition, the couple is on a bowling league in Newton, and the business sponsors a team, called, not surprisingly, ASAPAuto.

“We’ve met a lot of people doing that,” Viktoria said. “That’s just one of the things people don’t realize is here.”