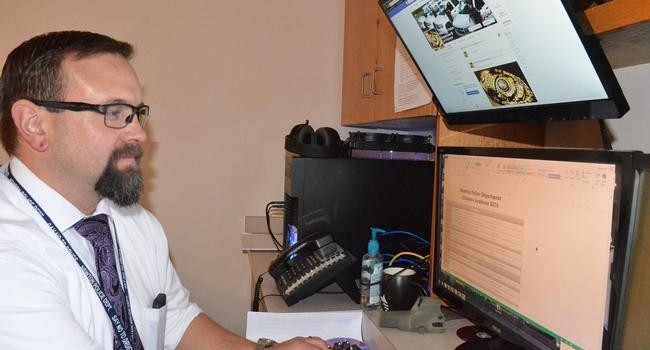 His name didn’t appear in the paper very often in 2016, but his work did. Lt. Bryan Hall has been working behind the scenes, as much as he can, to improve the department in a number of ways.
It means more efficient use of officers, and more communication through social media.

“I get private messages at 2 a.m., and that is good,” Hall said. “People believe they have someone they can talk too, which is huge for law enforcement. Calling 911, people may not be comfortable talking to an officer. It is a different presence and we can create an atmosphere where people feel comfortable.”

His work has not only assisted the department in expanding staff, but use staff more effectively. He has helped the department grow a social media presence, done community presentations for civic groups and community at large. He’s also helping recreate the Citizen’s Police Academy — all while working on his masters thesis.

That work, some of which is behind the scenes, has made him The Newton Kansan’s Newsmaker of the year for 2015.

He has worked behind the scenes on a serial burglary case, doing analysis of each incident to try and predict the next incident.

“We have had some forecasts on when and where burglaries may take place, and we have directed our resources to those areas based on the information he has been able to put together,” said Eric Murphy, chief of police. “A goal for the future is for him to get that software used more and us being able to understand it more.”

That means officers using in-car tools for hotspot policing — a dramatic change in how police work is done.

“That is a systemic change in how police work is done and is very slow,” Hall said. “But it is worth it.”

When budget hearings began with the city commission, the police department lobbied for more officers. They asked for four new people — they were given the authority to hire two. It was Hall’s statistical analysis that helped make the case and convince the commission to allow for more staff.

“Brian has, for the past six or seven years, been working on manpower studies,” Murphy said. “This year we really used those manpower studies and the crime analysis to present to the city commission about what our needs are.”

“It takes a lot of resources to put together a presentation that is understood by all. Mathematics is not a language a lot of people speak,” Hall said. “I think it turned out really well.”
Those three presentations were all different, adapted for the anticipated audiences at each venue.

Hall has also been in charge of the department’s social media — and the Facebook page now has more than 4,400 followers.

“He is constantly monitoring our Facebook page,” Murphy said. “When something comes up, he gets it addressed right away and develops relationships with people, that has had a positive impact on the department. He has diffused common misconceptions, misinformation and misunderstandings that individuals have had.”

Source: The Newton Kansan
Article and photos by Chad Frey