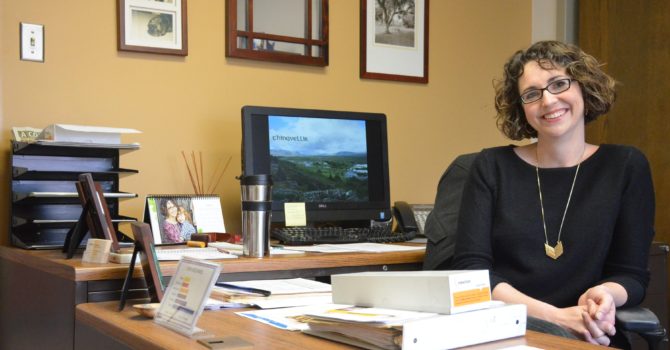 In her mid-30s, Erin McDaniel is one of the youngest women to be named one of the Newton/North Newton Woman of the Year.

That fact is not lost on the city of Newton’s public information officer.

“I almost see it as a challenge, as something to live up to,” McDaniel said. ”… That to me is a little daunting. I feel like I have a lot of time left in my life and it will be up to me to live up to that title, to strive to make the kind of difference other honorees have made.”

McDaniel is one of three women named this year. She, Lynnette Redington and Sue Engel will be honored during a brunch at 9:30 a.m. April 16 at the Meridian Center. The Woman of the Year Program is 60 years old this year.

McDaniel is a graduate of the University of Kansas, and also holds a min-masters degree from Wichita State University. Her career has included stints at the Kansas City Star, University Daily Kansan, Lawrence Journal-World and the Wichita Eagle. For nearly 11 years she has served as the public information officer for the city of Newton.

That, however, is only half of the story. She has served as president of the Newton Lions Club and Newton Young Professionals,. She also has served on the Newton Area of Chamber of Commerce Board, Kansas Association of Public Information Officers, City-County Communications and Marketing Association and Leadership Newton.

“Our local Lions Club has been fortified, and perhaps even sustained, as a result of Erin’s tenacity and dedication to the club’s principle of service,” wrote Barbara Burns in McDaniel’s nomination. “With others, Erin has been instrumental in the Lions Christmas Parade, Lions Pancake Day and public fireworks display.”

Recently McDaniel was tested — she was the main public information officer for a coordinated incident response team after a mass shooting that started in Newton and ended in Hesston.

It was McDaniel who was helping set up press conferences and dealing with media from around the world.

“The world’s perception of a community at work was Erin McDaniel at work,” wrote Randy Riggs, city manager for the city of Newton in support of her nomination. ” … All media contacts and press releases went through (McDaniel). It was (McDaniel) who prepped multiple officials before their press conferences and interviews.”

It was not only her work during the Hesston tragedy that earned her the award — and it was not the first difficult situation she has had to deal with in her position at the city.

McDaniel handled media on the scene of an officer-involved shooting with in Newton. She has also handled good news as well, like when the Lions Club took over the July 4 fireworks for a year and their continued efforts to keep a Christmas Parade going in downtown.

“While some community leaders are visible and outspoken, (McDaniel’s) leadership is quiet, dignified and behind the scenes,” Burns wrote. “Please do not confuse that with passivity. Her fingerprints have shaped Newton in recent years as a result of her commitment to causes and groups she believes in, and her ability to effectively communicate complex issues.”

Indeed, she prefers to write the story, rather than be the subject of a story.

“I feel very honored to be included among this group of distinguished women,” McDaniel told the Kansan. “This is a long tradition of women that have made a great impact on the community. I am grateful to my colleagues and friends who thought I was worthy of being nominated.”

Source: The Kansan
Article and photo by Chad Frey