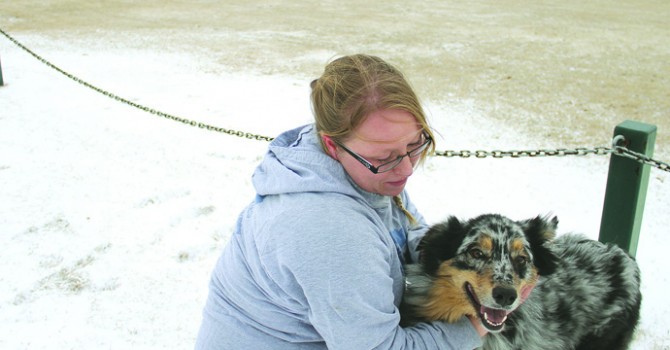 The temperatures and wind weren’t fit for man nor beast, but the two braved the cold Monday afternoon, and Klein even posted a photo on Facebook of Gryphon jumping over a low fence in the snow there.

The land is in the Centennial Park area north of the Blue Sky Sculpture and south of sled hill. Klein is director of a group that wants to bring a dog park to town, called Newton Dog Park Project. The area, which is about 2.4 acres, already has a gravel drive and parking area, and is just off of Kansas Avenue and five feet from the walking path.

“It’s great for accessibility,” Klein said. “It’s not completely central […] but it’s pretty easy to get to.”

The group considered other locations in the city but decided they liked this one, which basically is owned by the city, Klein said.

“We looked at other locations in the city, but this one is so awesome,” Klein said.

In 2012, the city of Newton had planned to create a dog park, but budgets were cut, which included the park. Since then, the Newton Dog Park Project has tried to get the park funded by the city, Klein said.

They plan to use private funding for start-up items, such as fencing and benches.

“The entire dog park would be fenced in,” Klein said.

Caring Hands Humane Society will be the fiscal sponsor, which means NDPP can use Caring Hands’ 501(c)3 non-profit status.

Anyone—businesses or individuals—can make donations. Just visit newtonksdogpark.com. People also can snail mail or drop donations by the humane society at 1400 S.E. Third in Newton, making sure to indicate the funds are for the dog park.

Klein also excepts there will be very little increase in maintenance costs at the location.

Currently, there is no dog park in Newton, with the closest one in Hesston, Klein said. She became interested in the project because her clients (she owns a dog sitting and walking business) asked if Newton had one or if it was getting one.

“Our goal is a haven for pets and their people,” the NDPP website stated. “Although Newton requires dogs to be on leash in most public places, a Newton Dog Park would open avenues for dog-human, dog-dog and human-human play for many people.”

“Right now in Newton, we don’t have a lot of opportunities for dog-to-dog interactions,” Klein said.

Having a dog park also would allow Caring Hands to have a place to have events where leashes aren’t used.

Klein believes the park also would benefit Newton from an economic standpoint, adding pet friendliness is something people look for in a community.

“Having easy accessibility to a dog park would increase the city of Newton’s pet friendliness, which is something new families look at when moving to a city,” Klein said.

Klein said she’s talked to realtors who say people do ask if Newton has a dog park.

The goal, she said, in working with the city is the park would be a city public park.

“This one would be for dogs and their humans,” Klein said.

The next step is for the Newton City Commission to officially approve the land for the dog park use, which Klein expected will be on the agenda at the next meeting, which is Jan. 5. She did say all the city commissioners have said they support it.

Klein isn’t sure about an opening date, as they need to work out how things, like the fencing, will cost. Anyone wishing to donate also can call Klein at 316-288-0016. Rotary Club of Newton is interested in being involved, and other groups interested are welcome to call Klein.