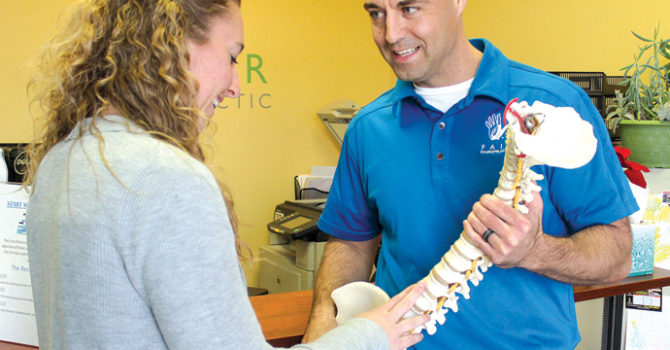 Fair has Chiropractic Business in Newton, Hires Another Newton Native

“I have always been fascinated by the human body and athletic performance,” [Mallorie Coffman, NYP member] said, sitting in Fair’s office.

That took her down the road of athletic training. She said it’s fantastic to be able to help someone make five more yards on the field, but she finds helping people with chiropractic medicine much more rewarding.

She’s glad she’s back in Newton.

“It’s good to be back here and close to everybody,” she said.

While at Newton High School, Coffman took anatomy and physiology and a health-care prep class. Also through NHS, she shadowed at the Newton Recreation Center and then got to meet a local chiropractor, Dr. Jonathan Roberts, from whom she got a summer job.

When she attended Southwestern College, she majored in bio-chemistry and athletic training. At Logan, she had the opportunity to do an eight-month residency at the school and then a four-month one at an outpatient facility at a small practice in Wisconsin. Fair said she graduated at the top of her class.

Coffman and Fair will complement each other, as Fair said he wanted to get someone else in there who would have strengths in other areas. Coffman can treat anyone, and she specializes in children and pregnant women.

“I work with women along the motherhood transition,” she said, which includes children, pregnancy, motherhood and post-partum. She’s also working toward becoming a doula, which is a birth companion, providing emotional support and physical assistance or offering post-birth support.

Coffman trained in the athletic population, as well.

Fair said he wanted to have another chiropractor, because when one is on one’s own in business, they have to dedicate much of their time to the business.