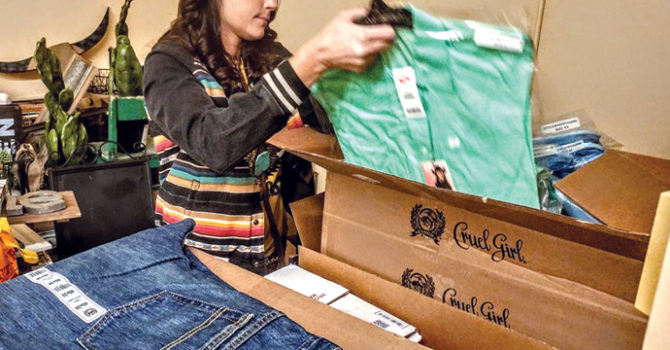 Willard Ropes Herself a Boutique in Newton

There’s gonna be a new boutique in town—The Cactus Crossing—which will have western-themed clothing, as well as other items.

“I’ll have a wide variety,” owner Cashion Willard said. “It’s not just [geared] to the country people. It’ll be a boutique with a little western flair.”

The boutique, going in at 617 N. Main St., is what used to be the north half of Moyo Clothing. Moyo is not going out of business: Moyo Clothing still will be at 615 N. Main St.

Although she’s residing in Manhattan, Willard is making the move to Newton and hopes to open in March.

“My ultimate game plan is the second weekend of March,” she said about her opening date.

What Willard will have for sale includes western-type clothing geared toward people who do team roping and barrel racing and clothing for people who don’t, and there will be tack, like for horses.

Willard said her dad is a veterinarian in the Girard area, and when he was out on a call, he saw the metal from a barn, and that’s where the metal that’s gracing the store came from.

“I completely ran his operations for 13 years of my life,” said Willard, who has a degree in business management.

In addition to enjoying running a business, Willard loves fashion.

“I’ve been a huge fashion person for as long as I can remember,” she said.

“I do love how this town has been so welcoming,” Willard said.