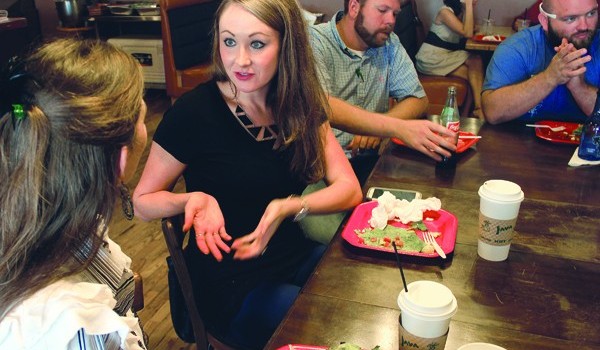 Young and professional in Newton

Ed O’Malley posed this question to those attending the Newton Young Professionals Lunch-N-Learn gathering Sept. 18: “When you think about the future of Newton, what concerns you the most?”

O’Malley, who was the speaker that day at Norm’s Coffee Bar in Newton, gave the NYP members 90 seconds to discuss the matter with someone at their table. O’Malley is the president and CEO of the Kansas Leadership Center in Wichita.

After the allotted time was up, some concerns sprouted from the audience.

Then O’Malley posed another question: What type of leadership will it take to tackle those specific challenges? He gave members another 90 seconds to talk about the matter. Types of leadership qualities discussed included self-awareness and openness (listening to others’ ideas).

O’Malley asked yet another question: What is the role in developing or supporting this kind of leadership? Answers included being courageous and having perseverance.

Audience member Christy Pickerill of rural Hesston, who’s been a member of the group for more than four years, asked O’Malley what is the best way to get others involved in the community who aren’t, and stated there are people doing more who are extremely busy. O’Malley responded by saying it’s important for people to not get really busy but to get purposeful.

About 50 people attended the Lunch-N-Learn session; NYP meets at noon the second Thursday of the month, usually at Norm’s. The next Lunch-N-Learn will be at noon Dec. 11 at Norm’s, and Robert Palmer will talk about starting a small business.

Young professionals attending the meeting were dressed in a variety of clothing — from caps, shorts and T-shirts to polo shirts and slacks to dress shirts with ties. There was at least one woman wearing a dress.

NYP leaders stressed anyone from the ages of 21 to about 40 can join, and people don’t have to just work in offices.

“It’s not just for white collar people,” NYP Vice President Eric Litwiller said. “It’s an age issue, not a what do you do for a living issue.” Litwiller works for Everence in Hesston.

Every Young Professionals organization in the country deals with that misconception. Anyone in that age category who works, spends time in or lives in the Newton area can join.

“We really feel like we’re more of a Harvey County kind of organization,” said Past President Erin McDaniel, public information officer for the city of Newton.

Members seem to enjoy the organization, as there was much chatter during the Lunch-N-Learn event while everyone ate.

“I love the people and the food and learning about all kinds of things without having to plan any of it,” Pickerill said. Pickerill stated she’s quite busy with her Mary Kay and math-tutoring businesses, as well as managing Snip N’ Clip haircut shop and her volunteer jobs. “Mostly, I like to see people my age passionate about what’s going on around here.”

Litwiller also believes in the organization, which is a branch of the Newton Area Chamber of Commerce.

“I think it provides a lot of opportunities for younger people and/or newer people to town with (chances) to get involved and get to know the people in the community,” he said, as it’s a great place to network.

The idea for the group, which formed in 2008, was the brainchild of Virgil Penner, who led the Newton Chamber at the time, McDaniel said. Years ago, the Chamber had the Jaycees organization, which was for young professionals, and that group died out. Since then, there hasn’t been a specific group for young professionals to get involved, and Penner wanted to create a group to introduce people in their 20s and 30s to the Chamber and give them development opportunities to take over leadership roles in the community, McDaniel said.

At the time, Penner talked to some young professionals he knew regarding an organizational meeting, and about 15-20 attended. They started having Lunch-N-Learns, as well as social events. People attended, and the group steadily has grown.

“The initial meetings drew a large crowd, which showed there was enthusiasm in the community for the YP concept,” McDaniel said.

Now, in addition to meeting once a month for the Lunch-N-Learns, NYP have quarterly mingles, which are after-hours events at sponsoring businesses. There, members eat, mingle and learn about the sponsoring business. A recent one was on Oct. 28 at the Kansas Sports Museum. If anyone is interested in joining, they’re welcome to attend one Lunch-N-Learn as a guest, and they’ll get lunch for free. After that, they’re asked to pay the $50 a year dues, and they still don’t have to pay for lunch.

The group also has an annual meeting every August. At the last annual meeting, as stated on the NYP Facebook page, they discussed events for 2014-15, elected new council members, voted on the new NYP logo and heard a YMCA fundraising update. They’ve also toured some large manufacturers and facilities in the area, including Prairie View, the jail and AGCO. This is a way to get NYP members to see what these businesses/facilities do and how they contribute to the community, McDaniel said.

NYP also takes part in volunteer/charitable causes, such as cleaning up along Sand Creek, collecting donations for charitable organizations, like the local safe house, and buying presents during the holidays for an Angel Tree at Wal-Mart.

Members pick needed items listed on the tree and go shopping as a group. This year, they’re doing that at 4 p.m. Dec. 2.

“So it’s a way to give back as a group,” McDaniel said.

And they’re looking for new members.

“We’re still in major growth at this point,” President Owen Kindall said. Kindall is a loan officer at First Bank.

They’re looking to market the group, as well as getting new memberships, Kindall said. The council is looking at their infrastructure, like getting a website and having a pictorial member directory.

For more information about NYP, visit their Facebook page at www.facebook.com/groups/newtonyp/ or their page on the Chamber’s website at newtonyp.org or email info@newtonyp.org.